Many survivors of domestic abuse have also experienced spiritual abuse, this may have been perpetrated by their spouses or by church leaders or members.

CCPAS (an Independent Safeguarding Christian charity in the UK) has produced papers and pamphlets on this topic.

In their pamphlet entitled, I Want to Understand Spiritual Abuse CCPAS uses the definition of spiritual abuse as was outlined by Oakley, 2013 in Oakley & Kinmond, 2013 p21:

Spiritual abuse is coercion and control of one individual by another in a spiritual context. The target experiences spiritual abuse as a deeply emotional personal attack. This abuse may include:-manipulation and exploitation, enforced accountability, censorship of decision making, requirements for secrecy and silence, pressure to conform, misuse of scripture or the pulpit to control behaviour, requirement of obedience to the abuser, the suggestion that the abuser has a ‘divine’ position, isolation from others, especially those external to the abusive context.

They go on to explain,

To begin with, it is important to understand that spiritual abuse is a form of psychological and emotional abuse that takes place within a faith context. Sufferers therefore experience being controlled, coerced and pressurised within churches and places of worship.

The wheel on the next page which has been produced by safe@havens at Interfaith Partnerships Against Domestic Violence outlines the different forms spiritual abuse can take.

Elements that may feel very familiar to survivors include using scripture or traditions:

Within relationships, spiritual abuse happens when one person misrepresents scripture in order to control and create dependence on the other person. This can happen between husband and wife and can happen in churches where church leaders encourage the victim of abuse to remain in an abusive situation or be ostracized by their community.

According to CCPAS, one way which can help prevent spiritual abuse is through empowerment.

What that might mean for survivors is to seek out churches and church leaders who have a understanding of domestic abuse and knowledge about how to address it appropriately when it becomes evident within their congregation and its members.

It might mean that we all need to educate ourselves on what the bible has to say about domestic abuse and divorce due to abuse, and to stand firm in the knowledge that:

Any form of abuse, then, is unacceptable behavior which directly defies God’s calling for Christ-followers to relate to each other in love. The person who abuses is sinning, the victim who wants to leave, is not in sin. While not everyone has the ability to leave an abusive partner, it is not wrong to attempt to do so if possible, the Bible encourages victims to seek safety (Proverbs 22:3 and 27:12; 1 Samuel 20; Luke 4:28-29; Acts 9:23-25; Matthew 18:15-17).

God acts clearly through the life and death of Jesus to take an ultimate stance against all forms of violence, oppression, marginalization, and abuse, declaring that ‘God is love’ and God’s love will not stand passively or silently when women are abused (1 John 4:8). 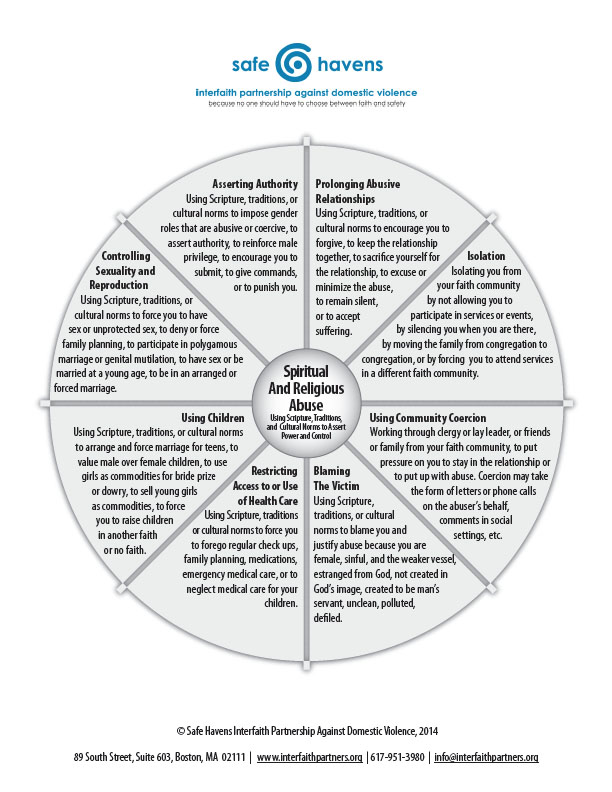